Welcome to Champions Jaguar Service. This is your first post. Edit or delete it, then start writing!

Jaguar ranks second among 36 industry nameplates evaluated by consumers in the J.D. Power and Associates 2005 Initial Quality Study – an examination of new-vehicle quality after 90 days of ownership. Moving up from its No. 3 position among nameplates in 2004, Jaguar initial quality now outpaces the industry average by 25%.

For a second consecutive year, Jaguar is the highest-ranked European nameplate in initial quality. With 88 P100 (problems per 100 vehicles), the average Jaguar has less than one problem per vehicle. In addition, Jaguar is one of the industry’s most improved nameplates, increasing 10% in initial quality since 2004. – J.D. Power 2005 Initial Quality Study. 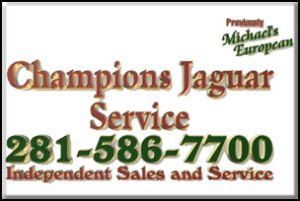